Summer put down her bowl of yoghurt and flopped on the floor, crossing her legs. She switched on the television, clicking through channels absentmindedly as she dug into her breakfast.

She momentarily paused in her clicking when the screen filled with purple. A woman in bright purple robes sat cross-legged behind a low table. But instead of a bowl of yoghurt, the woman had a crystal ball in front of her.

Summer looked at the TV guide. ‘Welwick’s Oracle’ started ten minutes ago and would run for twenty more. She clicked away the guide and settled in to watch. This should be entertaining.

The woman — Welwick, she supposed — sat in near complete stillness, peering into the shiny orb. After a moment, her face seemed to light up, and she looked up into the camera. Her eyes were a piercing grey, nearly white. Summer stared, transfixed, as they seemed to peer right back at her. “Ah…” Welwick said, her voice hushed, “I sense that a new viewer has joined us.”

Summer startled, then caught herself. A coincidence, or a clever trick. How many people would continuously be joining the channel in the half-hour it would run? Probably enough to say a new viewer joined every minute. A correct ‘prediction’ only because it could never be wrong. It was just Summer’s luck that it happened when she joined.

Welwick looked away from the camera for a moment to peer into her orb. Summer’s shoulders relaxed slightly as the piercing eyes turned away, but her attention was quickly caught by the crystal ball. It was the exact same shade of Welwick’s eyes. Was that smoke shifting inside?

Welwick’s voice interrupted her thoughts, voice still gentle and hushed. It would have been calming if it wasn’t for the words themselves. “A young woman from… Stardew Valley?” The blood drained from Summer’s face. Slowly, she looked up from the crystal ball, to find Welwick staring at the camera once more. She sat paralysed, half-eaten bowl of yoghurt clutched in her hands.

How did she-? That wasn’t- How? There were no more than two-hundred people in Stardew Valley, most living kilometres away from their nearest neighbour, only a few living in small communities. Summer just moved into her grandfather’s old farm, just outside of Pelican town, the biggest community in the Valley, and still only housing about thirty people. There was no way this was a coincidence.

“Welcome, welcome!” There had to be a logical explanation. Maybe… maybe the television provider allowed her to see the locations of viewers in real time. Yeah, that had to be it.

As if reading her thoughts, a patronising smile appeared on Welwick’s face. “You’ll figure things out soon enough.” She looked to the side, somewhere out of sight of the camera. “Ah, I think it’s time…”

She shifted, then placed her hands on the table on either side of the crystal ball. She closed her eyes and breathed deeply. When she opened them, they glowed. She turned her face to the sky, unseeing. Her arms lifted high up in the air. Summer was transfixed. She didn’t even notice the gentle glow emanating from the crystal ball.

In a voice still gentle, but louder, she spoke: “The spirits have answered me…” She took a ragged breath. “The spirits are very displeased today. They will do their best to make your life difficult.”

The glow faded from her eyes, her arms lowered. She sat there, face downcast, chest heaving with exertion, for almost a full minute. Then she looked up, and smiled the sweetest smile. A smile that felt… meant for Summer alone. “But at least one of us must be favoured by the spirits today, for you found yourself here, with a warning of bad fortune. Do with it as you please, but I advise you heed the warning.”

The screen turned black with a dull pop. Summer slowly lowered the remote, finger still held over the power button. Her hand shook. She stared at the black screen, trying to process what just happened.

Eventually, she managed to tear her gaze from the screen and stood up. In the now silent room, her movements seemed awfully loud. There was an emptiness to it, as if Welwick had taken something away or… or filled a space Summer hadn’t known was there, but was now acutely aware of.

She shook off the thought. Ridiculous. But still… she left the house, too uncomfortable to stay and finish her breakfast. She didn’t feel hungry anymore anyway.

The next morning she sat on the same spot, once again with the remote in her hand and a bowl of yoghurt on the table. Only this time, she knew exactly what channel to turn to. But instead of pressing down, she hesitated, her finger hovering over the button.

She wanted to, she wanted to watch, but at the same time, just as much as she wanted, did she never want to see the colour purple again in her life. She’d spent yesterday constantly on edge. She didn’t want to repeat the experience.

She sat there, staring at the television without really seeing it. There was still this emptiness. An emptiness that she somehow knew could only be filled with— The memory of Welwick’s smile entered her mind. That sweet smile meant only for her.

The sudden loudness of a commercial startled her out of her thoughts. Summer glanced at the clock.

A surge of desperate anxiety shot through her. She pressed the button like her life depended on it. The screen flickered for a moment, before being filled with purple once more. After a moment, Welwick looked up from her crystal ball in something akin to surprise. She looked right at Summer and smiled that same sweet smile. “Welcome back,” she said, her gentle voice spreading through the room like warmth. “I’m glad to know we’ve got another regular.” 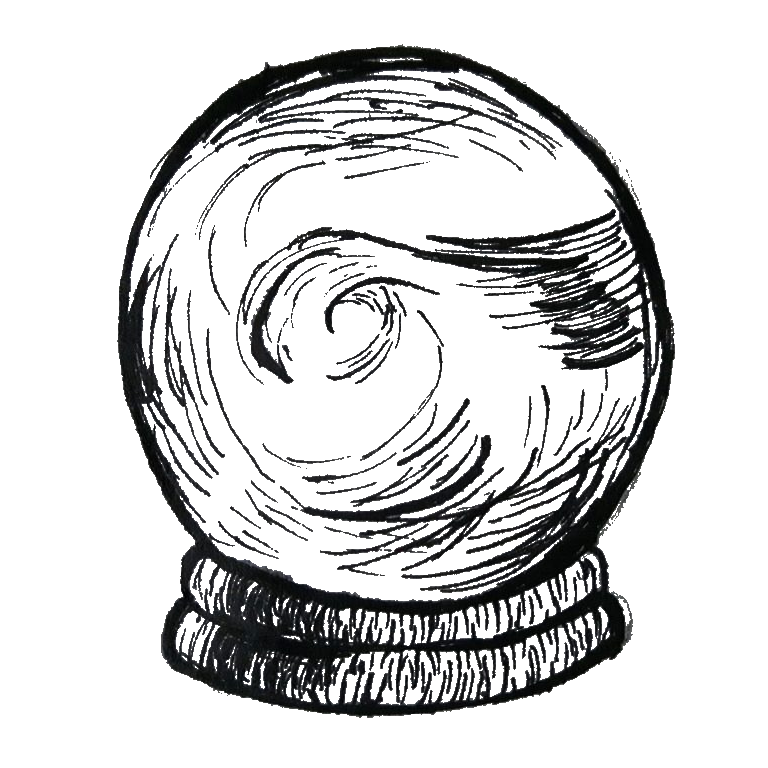 
Buy me a coffee

to support my writing endeavors

Stories from the countryside, presented by Derek Nacre.

A woman tells Derek about the vanishing ghost castle near the German border.

When the Drowned Oracle confirmed the death of Captain Agustin, the winter ended.

Behind you, the workers shuffled, rubber soles shifting on rough concrete. You pressed your lips together. “What am I supposed to be helping with?” you asked, glancing behind you.

“Manpower,” a burly worker said, joining you at the front. “We need more people.”

You eyed the big shelves of metal, parts moving automatically, pushing crates around, carrying them where they needed to be. “In a place where everything runs by itself?”

Something rumbled in the distance. Wheels, maybe, or gears. A loud whistle from the same direction. The workers jumped, and three sprinted there with nervous, even fearful expressions. Their steps echoed on the cement floor long after they vanished from view.

The sun was at it’s peak, so high above her she nearly cast no shadow at all. And when the clock-tower struck the 13th hour, even that little shadow fell away.